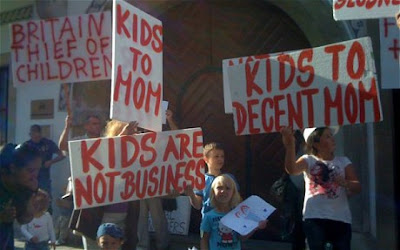 Protesters outside the British Embassy in Bratislava Photo: THEDAILY.SK


Concerned by my reporting on how our “child protection” system has gone off the rails, one of my readers, David Phipps of Witney, wrote about it to his MP, David Cameron. As Mr Phipps records on his Witterings of Witney blog, the PM replied that he was aware of my articles but that they give “a very misleading picture” of our care system. I may occasionally single out a case where “a wrong decision” was taken, but he wanted to assure his disbelieving constituent that such mistakes are “exceptionally rare”.

Among those rather better informed, and far less complacent, about what our social workers and courts get up to than Mr Cameron are a growing number of shocked foreign observers. The government of Slovakia, appalled at the number of children seized from Slovak parents in Britain for what it calls “no sound reason”, is threatening to take Britain to the European Court of Human Rights for what it believes is systematic violation of the rights of both children and parents.

When I was in India recently, a remarkable press conference took place in Delhi, attended by official representatives of five other Asian countries, at which senior legal figures, including the former chief justices of the Delhi and Punjab high courts, launched a petition calling on the Indian government to protest at the inhuman way so many Indian children are being seized in Britain and other Western countries. Earlier this year, widespread publicity was given to the Indian government’s intervention in the case of two Indian children seized by the Norwegian authorities, which resulted eventually in the children’s return to India.

The petition, signed by an array of Indian lawyers and human rights campaigners, listed 19 points criticising the “confiscatory child proceedings” which have torn apart so many Indian familes in the West. Nothing disturbs these lawyers more than the way in which social workers snatch children from their parents for the flimsiest of reasons, supported by courts which stand every cherished principle of law on its head, and rule that it is better for children to be looked after by strangers than by their own extended families.

Mr Cameron may remain oblivious to what is going on under his nose, but in the wider world it is becoming an international scandal.